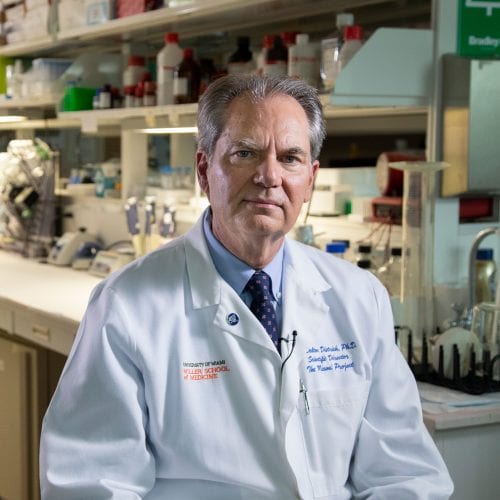 Dr. Dalton Dietrich is Scientific Director at The Miami Project to Cure Paralysis and the Kinetic Concepts Distinguished Chair in Neurosurgery at the University of Miami Miller School of Medicine. He received his Ph.D. in Anatomy from the Medical College of Virginia in 1979 and completed a postdoctoral fellowship in the Department of Pharmacology at Washington University, St. Louis, MO, 1981.

Research in Dr. Dietrich’s laboratory is focused on clarifying the pathophysiology of brain and spinal cord injury with the ultimate goal of developing new therapies to protect and enhance recovery of function. Over the last 40 years, Dr. Dietrich and colleagues have studied the cellular and molecular injury mechanism underlying various neurological disorders including stroke, cardiac arrest, traumatic brain and spinal cord injury. In terms of neuroprotection, he and his colleagues provided the initial preclinical data indicating that small differences in the temperature of the brain and spinal cord critically determine whether neurons die or not following neurological injury. These preclinical studies of therapeutic hypothermia have now been successfully translated to the clinical arena, where patients are being cooled following out-of-hospital cardiac arrest, strokes, traumatic brain injury and more recently spinal cord injury. Most recently, Dr. Dietrich and colleagues have investigated the importance of abnormal inflammasome activation in the brain and spinal cord after injury. These studies have uncovered a new therapeutic target for modifying the immediate immune response to injury. In addition to these studies, Dr. Dietrich and colleagues are using novel cellular and drug treatments to promote reparative processes and functional recovery after brain and SCI. He is the Sponsor of a first-in-man FDA approved clinical trial testing the safety of human Schwann cell transplants in people with severe SCI and a peripheral nerve bridging strategy for severe leg trauma.

Dr. Dietrich has published over 375 refereed journal articles, 75 book chapters and 4 books. His published work has been cited over 38,000 times. He has been listed by the Institute of Scientific Information as a “Highly Cited Researcher”, placing him in the top 0.5% of all scientists based on the impact his research has made on other scientists. Dr. Dietrich has been a thesis/dissertation advisor to 9 graduate students and has trained over 50 postdoctoral fellows and visiting scholars from all over the world. His research programs are supported by the NIH, Department of Defense, Veteran’s Administration, State of Florida and The Miami Project to Cure Paralysis. He serves on many study sections for NIH, Department of Defense, Veteran’s Administration, and several Editorial Boards. He is currently Editor-in-Chief of the Journal Therapeutic Hypothermia & Temperature Management and Deputy Editor of the Journal of Neurotrauma. Dr. Dietrich is a founding member of InflamaCore and ACESO Therapeutics.