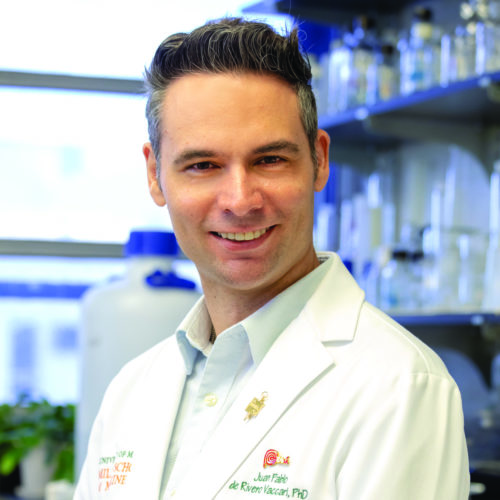 Dr. de Rivero Vaccari is currently a Research Associate Professor in the Department of Neurological Surgery & The Miami Project to Cure Paralysis, and a Distinguished Faculty Member of the Center for Cognitive Neuroscience and Aging at the University of Miami Miller School of Medicine. He has studied the innate immune response for over 15 years and was the first to show the involvement of the inflammasome in vivo in a sterile event, particularly after spinal cord injury.

Dr. de Rivero Vaccari graduated Summa Cum Laude with a B.S. in Biology from Florida International University where he was inducted into the Phi Beta Kappa Honor Society (2004). He then pursued his Ph.D. in Physiology & Biophysics at the University of Miami in the laboratory of Dr. Robert W. Keane (2007) and his post-doctoral fellowship in Neurotrauma at The Miami Project to Cure Paralysis in the laboratory of Dr. W. Dalton Dietrich (2010). He recently graduated with a M.S. in Business Analytics (2020) from the Miami Herbert Business School of the University of Miami. In addition, he has trained on Biomarker Science at The Harvard Clinical and Translational Science Center and on Computational Immunology at The Santa Fe Institute. In addition, he is Lean Six Sigma Green Belt certified.

Dr. de Rivero Vaccari is also a managing member of InflamaCORE, LLC., a member of the Scientific Advisory Board of ZyVersa Therapeutics, Inc, an Associate Editor for the Journal Frontiers in Molecular Neuroscience and an Editorial Board Member of the Journal Cells in the sections of Cells of the Nervous System, Cellular Immunology & Cellular Aging.

My research focuses on understanding early inflammatory events corresponding to the innate immune response, the first line of defense against tissue damage and infections.

The immune response is divided into two phases: Innate immunity and adaptive immunity. The innate immune phase corresponds to the early events of the inflammatory response and precedes the adaptive immune phase.  It is classically defined as the first line of defense against infections or damage. It is initiated by danger/damage-associated molecular patterns (DAMPs) or by pathogen-associated molecular patterns (PAMPs) that are recognized by pattern recognition receptors (PRRs). DAMPs are endogenous ligands such as ATP, DNA or RNA, whereas PAMPs include exogenous activators like bacterial lipopolysaccharide or bacterial flagellin.

PRRs include toll-like receptors (TLRs), NOD-like receptors (NLRs), RIG-like receptors (RLRs) and C-type lectin receptors (CLRs). Upon PRR-activation, there are a series of signaling events that result in the production of inflammatory cytokines such as interleukin (IL)-1b, IL-18, tumor necrosis factor (TNF) or type I interferons (IFN), among others. These cytokines contribute to tissue damage by mechanisms such as cell death and exacerbated inflammation.

INFLAMMASOMES: Of particular interest to us is the role of the inflammasome, a multiprotein complex involved in the activation of caspase-1 and the processing of the pro-inflammatory cytokines IL-1b and IL-18, on the pathology of central nervous system (CNS) injury and disease with a focus on spinal cord injury, traumatic brain injury, stroke, aging and Alzheimer’s Disease.

BIOMARKERS: We study biomarkers as prognostic and diagnostic options that also have the  potential to be used as therapeutic targets to improve outcomes after CNS injury and disease. The development of biomarkers for CNS injury and disease has the potential to improve the care of patients by determining the severity of damage to the CNS as well as by monitoring the recovery of patients.

My laboratory studies the innate immune response in the following conditions:

Spinal Cord Injury (SCI): With a yearly incidence of approximately 12,000 new cases, considering that many patients with SCI are young adults, and that no-FDA approved therapy is yet available, SCI is devastating. The inflammatory response is part of the secondary injury cascade of SCI events and is partially responsible for the deleterious effects occurring after trauma. Therefore, anti-inflammatory therapies offer the possibility of limiting damage after SCI; hence, resulting in improved histopathological and functional outcomes.

Traumatic Brain Injury (TBI): Traumatic brain injury is the leading cause of disability in young adults, affecting approximately 5.3 million Americans. The inflammatory response after TBI contributes to neuronal death and progressive axonal loss over days to weeks after injury; thus, a better understanding of how inflammation contributes to brain damage after injury is of utmost importance in order to develop better therapies to improve outcomes in this patient population.

Stroke: Stroke is a major problem affecting populations worldwide. It is the second most common cause of death in the world after heart disease. In the United States stroke is the fourth leading cause of death, and the societal costs are approximately 80 billion dollars, which are expected to double by the year 2030. Moreover, the inflammatory response is a key contributor to the deleterious outcomes after stroke. As a result, it is important to identify new and better anti-inflammatory therapies aimed at successfully treating this patient population.

Inflammaging and Alzheimer’s Disease (AD): As we age our brain produces a basal level of inflammation that progresses over time, a phenomenon referred to as inflammaging. This inflammatory response in part contributes to the cognitive decline associated with aging, and it also contributes to the development of neurodegenerative disease like AD. Thus, by therapeutically targeting the inflammatory response we have the potential to delay the onset of neurodegeneration..

Find out about the Laboratory of Juan Pablo de Rivero Vaccari