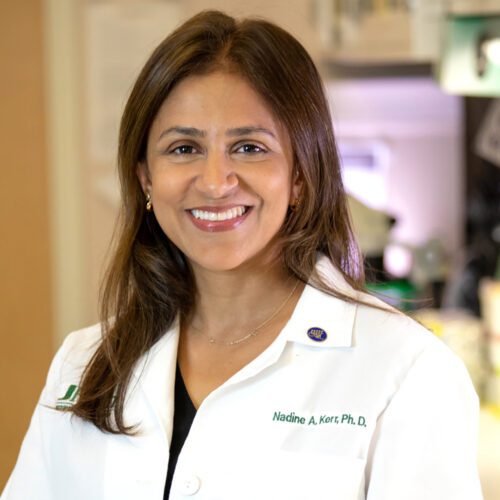 Nadine A. Kerr, PhD is an Assistant Professor at The Miami Project to Cure Paralysis in the Department of Neurological Surgery at the University of Miami Miller School of Medicine. She received her B.A. degree at The George Washington University and PhD in Neuroscience in the Translational Track under the training of Drs. Robert W. Keane and W. Dalton Dietrich from the University of Miami.

As a PhD candidate she received a NIH F31 fellowship for her thesis work which examined the role of the innate immune response and cell death mechanisms in Traumatic Brain Injury induced pulmonary dysfunction. She completed her postdoctoral work with Dr. Helen Bramlett in the Department of Neurological Surgery at the University of Miami, where she studied gut-brain axis dysfunction after stroke.

She started her faculty position  at The Miami Project to Cure Paralysis at the University of Miami Miller School of Medicine in 2022,  where she currently investigating mechanisms of systemic organ dysfunction after Central Nervous System injury.

The focus of our research is to examine the pathomechanisms of the systemic inflammatory response and non-neurological organ dysfunction following Central Nervous System (CNS) injury, particularly traumatic brain injury (TBI) and stroke. After CNS injury and damage to the blood-brain barrier (BBB), inflammatory mediators are released into the circulation and contribute to systemic organ damage. This can then lead to further neurological damage resulting in bidirectional communication between the brain and systemic organs. The two main organ systems that we are currently investigating are the respiratory and gastrointestinal systems.

We are investigating the role extracellular vesicle (EV) mediated-inflammatory signaling in systemic organ dysfunction after TBI and stroke. Extracellular vesicles, such as exosomes and microvesicles, are involved in cell-to-cell communication. In particular, we are interested in EV content and how EV release after TBI and stroke contributes to inflammation and cell death in non-neurological organs. We have conducted years of research regarding inflammasome signaling and pyroptotic cell death. The inflammasome, which is part of the innate immune response, leads to the cleavage of caspase-1 which can induce a regulated form of cell death known as pyroptosis. Lastly, we are also investigating therapeutic interventions that block EV uptake and pyroptosis. Our primary goal is to use these therapeutics interventions to reduce systemic inflammation and thus ameliorate neurological and systemic organ dysfunction after TBI and stroke.