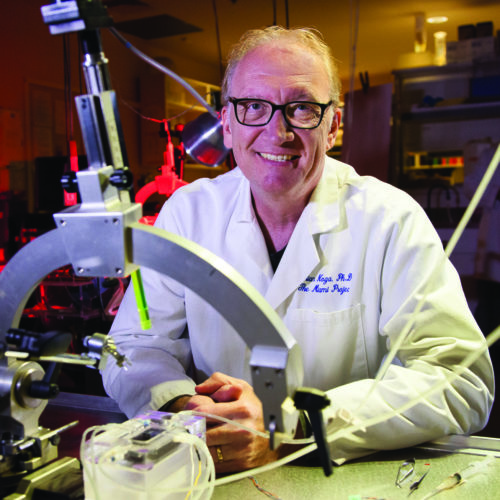 Dr. Noga obtained his Ph.D. at the Department of Physiology, University of Manitoba in the laboratory of Dr. Larry Jordan. His Ph.D. research focused on the role of various brainstem centers and descending reticulospinal pathways involved in the initiation and control of walking. Later, as a postdoctoral fellow in the laboratory of Dr. Elzbieta Jankowska at the University of Gothenberg, Sweden, he studied the brain’s control of identified spinal neurons involved in reflex pathways related to locomotion. In particular, he became interested in the influence of monoamines on the activity of spinal reflex circuits and spinal locomotor networks. At The Miami Project to Cure Paralysis, he has continued this line of research examining the monoaminergic innervation and receptor profiles of spinal locomotor neurons and the properties of spinal monoamine release during electrical activation of the descending monoaminergic pathways. He presently pursues research on the effects of electrical deep brain stimulation of descending locomotor pathways on recovery of walking following incomplete spinal cord injury. Currently, he is the Host Editor for a Frontiers in Neural Circuits Research Topic entitled “Recent Advances in Neuromodulatory Control of Spinal Function in Health and Disease”, with 20 articles published to date. To be published as an eBook.

My research interests have focused on understanding the brain and spinal control of walking. We have: a) characterized monoaminergic control of spinal reflex transmission from group II muscle afferents important for locomotor function; b) identified locomotor-activated neurons in the spinal cord controlling hindlimb locomotion; c) identified key components of the descending pathway for the initiation of locomotion; d) demonstrated that locomotor-activated neurons in the spinal cord are innerved by terminals of descending noradrenergic and serotonergic neuromodulatory pathways and are immunoreactive for monoaminergic receptors implicated in the control of locomotion; and e) demonstrated that monoaminergic neuromodulatory control of spinal function is mediated in part by extrasynaptic or volume neurotransmission. This form of communication between cells within the nervous system is defined as diffusion of signaling substances or neurotransmitters from a distance via the extracellular space rather than via the synaptic cleft (which form the basis of synaptic transmission). Volume transmission does not require precise contacts between cells (synapses) and has therefore less stringent requirements than synaptic transmission. This fundamental difference has important implications for neuroregeneration strategies which aim to reconnect brain and spinal cord after injury and for neurotransmitter enhancement strategies, which aim to facilitate spinal function by reestablishing neurotransmitter levels to pre-injury levels.

Impairment of walking is a debilitating consequence of spinal cord injury resulting from the disruption of neuronal pathways projecting from the brain to the spinal cord neurons which generate locomotion. Fortunately, after injury, these spinal neurons retain the neurotransmitter receptors used by descending pathways originating in the brain to control them. This leaves open the possibility that a therapeutic improvement in the ability to walk can be achieved, providing that the appropriate neurotransmitter is made available to activate or modulate the activity of these neurons. This forms the basis of a “neurotransmitter enhancement therapy” following spinal cord injury.

The long-term goal of my research is to develop and optimize treatments for spinal cord injury based on neurotransmitter enhancement strategies. Of the many possible neurotransmitter classes that could be used for this purpose, the monoamines (serotonin, norepinephrine and dopamine) hold particular promise as transmitter replacement candidates. Monoamine pathways originate from neurons located within the brain, and are released in the spinal cord from the terminals of their descending projections.  Research from several laboratories support the idea that monoamines facilitate or modulate locomotion after spinal cord injury, even when all projections have been damaged, since the target neurons within the spinal cord still retain the receptors which bind to monoamines. Therefore, we have concentrated our recent research effort on understanding the role that these transmitters play in the production of locomotion. We have developed biosensors for the detection and measurement of monoamines to determine the patterns and timescales of release within the spinal cord following activation of the monoaminergic neurons which project to the spinal cord. These studies have shown that the release of monoamines within the spinal cord is widespread and can be dynamically regulated on a timescale of seconds. In contrast, highly localized spinal monoamine release observed in steady state (at rest) conditions, resulting from low levels of spontaneous activity in descending monoaminergic neurons, may be regulated on a timescale of minutes. The properties of monoamine neurotransmitter release, diffusion and clearance observed in our studies point to a powerful regulation of extracellular neurotransmitter levels which limit the spread of monoamines in the spinal cord. Thus, only a very small percentage of transmitter enters the spinal cord when applied from the outside and the maximum concentrations reached within the cord decrease rapidly with depth from surface. These results have implication for the design of neurotransmitter replacement therapies using externally applied substances. For spinal cords which are relatively large such as in the human, applications of transmitters to the surface of the spinal cord are likely more beneficial for long-term continuous modulation of neuronal activity of neurons located in superficial areas of the spinal cord and may be better suited for targeting sensory-related functions of sensory and motor systems. For directly affecting locomotor generating neurons and their circuits located in deeper parts of the spinal cord, very high concentrations of transmitters would be needed, increasing the risk of unwanted side-effects. As an alternative strategy, we are exploring the use of deep brain stimulation to enhance transmitter release from surviving pathways innervating deeper target (locomotor) areas of the spinal cord following incomplete spinal cord injury. An advantage of the use of deep brain stimulation is that it is adjustable and would allow one to increase monoamine release as needed, duplicating the temporal pattern of monoamine release observed in the uninjured spinal cord during walking.

Overall, these results have led to the development of a new conceptual framework for our understanding of the control of spinal locomotor neurons by the brain. By adjusting the level of activity in descending monoaminergic pathways (and therefore the extracellular concentration of transmitter within the spinal cord), the nervous system may change spinal neuronal excitability overall to effect a physiological “state change”. Descending locomotor control centers may utilize the diffuse nature of monoaminergic innervation to affect neurons over large regions of the spinal cord, thereby lowering the gain in sensory systems that may interfere with ongoing movement and facilitating locomotor circuit function all at the same time. Control of spinal neurons on a smaller scale may be possible by modulating monoamine release locally. In this way, the monoaminergic system would be flexible, allowing for both broad-based and specific (fine-tuned) control of spinal neuronal populations, depending upon the behavioral state and functional requirements. The identification of this organizational principle governing spinal neuromodulation represents a significant advance in our understanding of brain/spinal cord communication. This research also provides new insight into the processes of locomotion and into the dynamic nature of descending systems controlling this behavior. The results of these studies will lead to a better understanding of the major pathways and the key cells involved in the initiation and control of walking.

BOOK CHAPTERS
Noga BR*, Opris I. (2017). The hierarchical circuit for executive control of movement. (Chapter 5). In: Physics of the Mind and Brain Disorders: Integrated Neural Circuits Supporting the Emergence of Mind. (Springer Series in Cognitive and Neural Systems, New York, NY). Edited by Drs. Ioan Opris and Manuel F. Casanova. ISBN 978-3-319-29674-6_5. As of 7/27/2018 this chapter is 6th most downloaded chapter from the book (with 34 chapters).