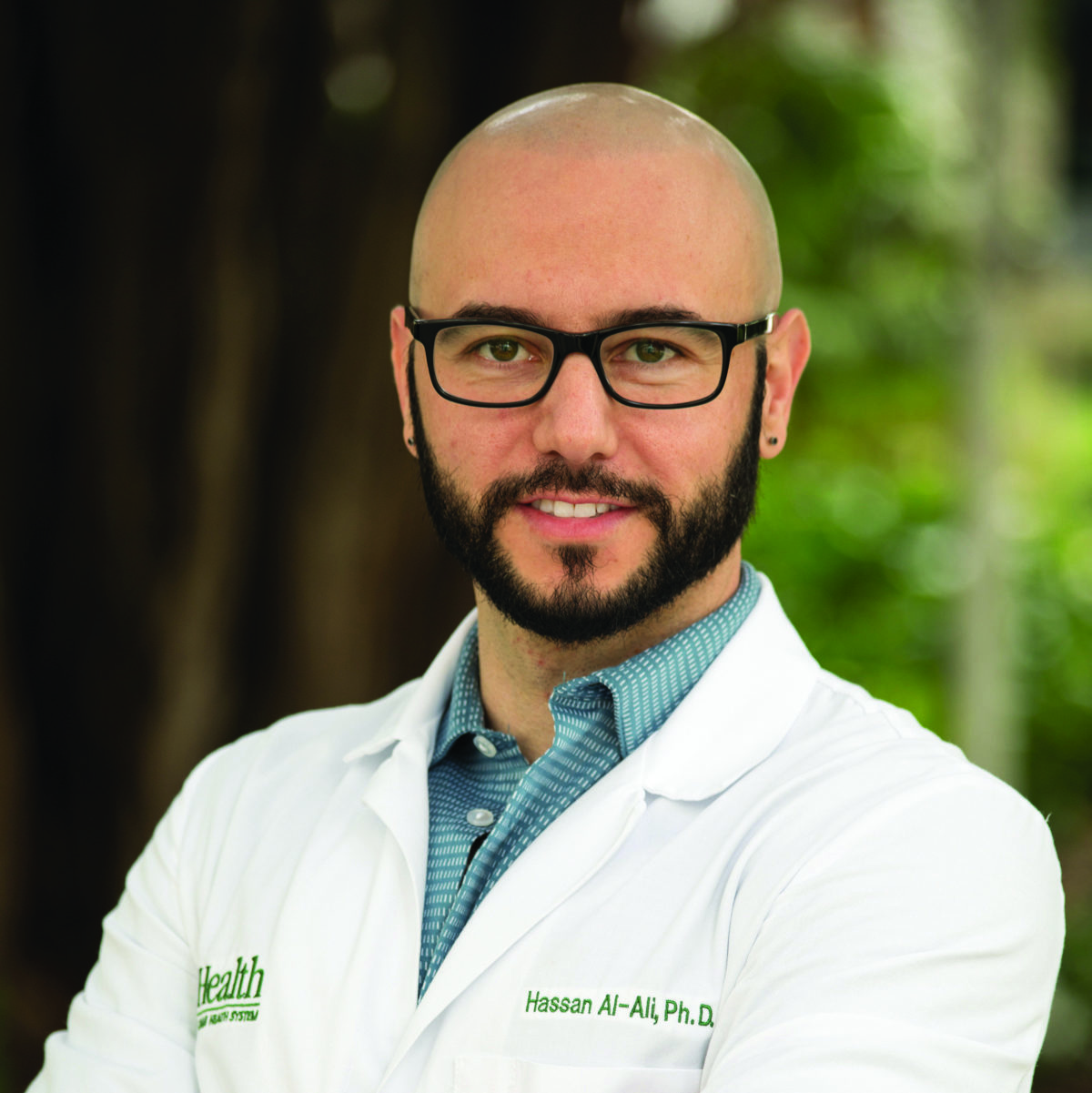 (December – 2019) Miami Project investigators on the edge of discovery as they unlock a novel mechanism for treating SCI.  The Miami Project scientists, on the edge of discovery, are working hard to make sure that their science is not only solid and novel, but, more importantly, translatable.  With the increasing costs of drug discovery, and bringing encouraging candidates to clinical trials, The Miami Project’s research team is acutely cognizant of all the components and problems that tend to lead to failures in translating basic research into therapies for patients.

Because of that challenging climate, researchers like Hassan Al-Ali, Ph.D., Research Assistant Professor, Department of Neurological Surgery and The Miami Project are paying close attention to not only positive results in their lab, but reproducibility by other outside labs in the early stages of studies.

Dr. Al-Ali and colleagues John Bixby, Ph.D., Professor, Departments of Molecular and Cellular Pharmacology, Neurological Surgery and The Miami Project, and Vance Lemmon, Ph.D., the Walter G. Ross Distinguished Chair in Developmental Neuroscience, Professor, Department of Neurological Surgery and The Miami Project, are specifically trying to discover the biological mechanisms that can be targeted with a drug to have a clinically meaningful outcome on spinal cord injury (SCI).  They are focusing specifically on trying to get the axons to regrow after trauma.  The prevailing understanding is that there are two biological mechanisms that work together to prevent these damaged axons from re-growing.  One is called the extrinsic mechanism (or pathway), which is triggered by molecules in the center system tissue surrounding the neurons, that signal to the axons to stop growing.  And the other one is the intrinsic mechanism, which is intrinsic to the neurons themselves, and as they age, they lose that ability to regenerate.

Over the years, scientists have tried to target one pathway or the other with some modest growth of the axons.  This process is complicated by the difficulty of identifying a good drug target for just one disease pathway, let alone two. To tackle this problem, The Miami Project researchers developed a novel technology to allow them to efficiently find such targets.  Because of this, they were able to find a drug candidate target in each of the two pathways.  They then discovered one molecule (drug candidate) that engages both targets and modulates both pathways at the same time.  Because of this simultaneous engagement, the team was able to see a more robust growth of axons than anything they have seen before.

“I am very excited about the research we’ve been doing in the axon regeneration group since I joined The Miami Project. This drug candidate that I am most excited for came through multiple levels of investigation, and it is almost miraculous that it all came together in the span of about eight years. Typically discoveries like this can take two decades or more,” said Al-Ali.

To put that statement into perspective, Dr. Al-Ali’s and colleagues have tested more than 400 million different compounds on neurons in culture, and this discovery by far had the biggest effect.  They feel it was specifically because of the approach they used, while also trying to identify something that could address both reasons for failure of axons to grow.

“This research has been fortunate to get support from The Miami Project, The Buoniconti Fund, and the Coulter Family Foundation here at the University of Miami because they recognized the translational potential, and also the clinical need, that this discovery could address in the SCI domain.  They’ve provided us with the essential seed money to take what was an interesting bench observation, that is now a drug candidate, into pre-clinical development,” added Dr. Al-Ali.

The team has completed some very preliminary pre-clinical work that has everyone encouraged that they could be on the edge of discovery.  In delivering the molecule to animals modeled with SCI, they saw not only robust axonal growth, but behavioral recovery. The animals had increased sensation and movement.  The work was done in two separate laboratories, one at The Miami Project and another at Indiana University.  The labs have two different models of SCI, and in both models extremely encouraging results were observed.

What makes this research novel in the SCI realm is that scientists are looking at a drug candidate that targets two mechanisms at the same time.  They’ve found that dual targeting, or poly-pharmacology, is staring to become more important in drug development because the industry is realizing that there are often more than one mechanism at play during injury or disease. Cancer researchers have been working like this for many years, but until recently neuroscientists were not looking at the problem this way.  Miami Project investigators have found that by targeting one process, it was not likely enough to elicit the real therapeutic efficacy that is desired. Our research is telling us that what is often needed is to target multiple mechanisms to see more positive results.

Presently the research team is beginning the pre-clinical phase to obtain the necessary data to determine if their preliminary excitement about this drug candidate (molecule) is warranted.  Once that work is complete, and assuming positive results, they would then put a package together to present to the FDA for a phase one clinical trial. Being part of The Miami Project positions this research perfectly because there are many people in the group already working on clinical trials who have extensive experience designing these trials.  This is one very big advantage as Miami Project researchers move this exciting research forward as we continue on the edge of discovery.