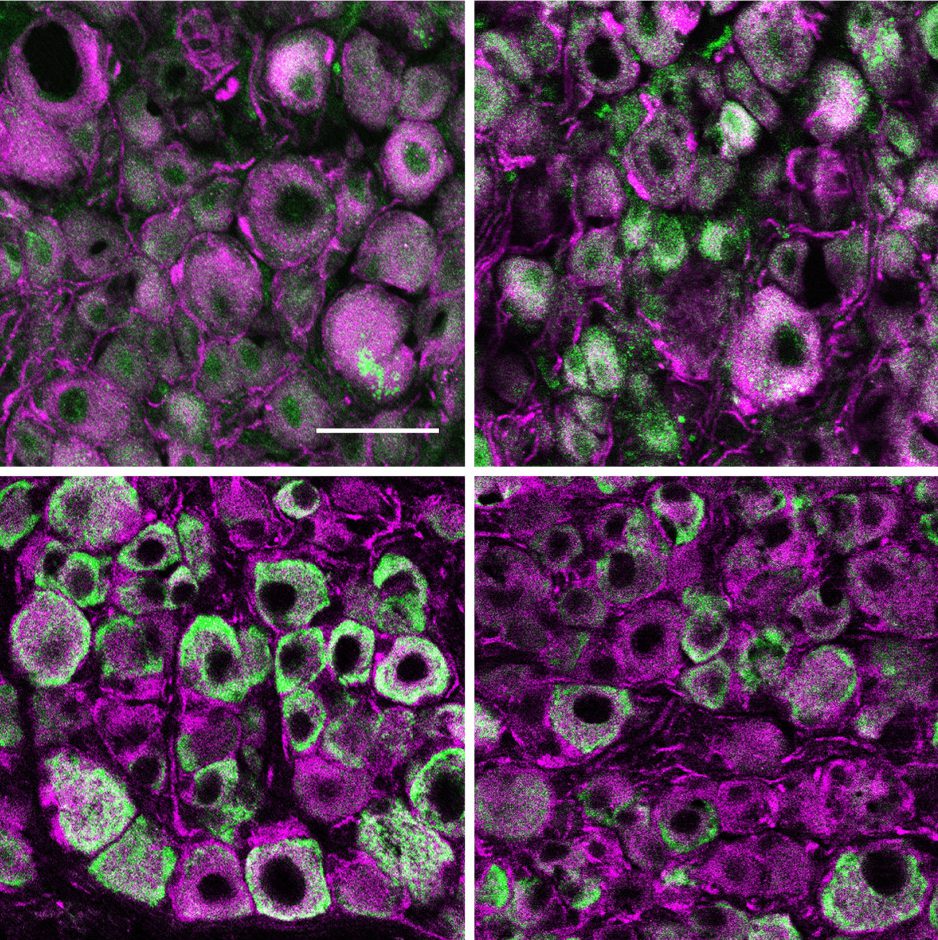 The study was launched from an initial characterization of changes in expression of certain genes in the dorsal root ganglia (DRG), a specific and well-studied cluster of sensory nerve cells that reside close to the spinal cord, in mice of different ages. An unbiased comparison of the broad patterns of gene expression in young and old animals revealed a surprising difference in parts of the genome related to immune function, inspiring further investigation. Before exploring the immune–nervous system cross-talk, however, it is important to understand the model being studied.

Compared to nerves in the central nervous system—those encased within the skull and spine—nerves of the peripheral nervous system are known to have a greater capacity to regenerate after injury. However, with aging there is a decline in even the peripheral nerve’s axonal regeneration and subsequent recovery of neurological function. This age-related derangement of peripheral nerves might seem unrelated to spinal cord injury, where solutions are being sought for regeneration of central nerves due to damage from injury rather than aging. However, understanding nerve regeneration through a developmental lens, by characterizing the existing natural processes of growth and degeneration, can help to identify potential targets for therapeutic interventions that apply across different nerve types. Indeed, this study revealed that a signaling protein, known as Chemokine ligand 13 (CXCL13), is involved in the immune-mediated restriction of regeneration in older mice. Furthermore, blocking CXCL13 resulted in better regeneration, suggesting that this molecule and the pathway it acts on could be a target for future neuroregeneration therapies.

To reach this conclusion, the researchers used the initial genomic analysis, focusing on ribonucleic acid (RNA) sequence data, to identify a relationship between aging and activation of immune cells known as T cells after nerve injury. Subsequent experiments showed that injury resulted in a cascade of signaling events that culminated in increases in CXCL13, the final step attracting T cells, as these immune cells have receptors to which CXCL13 binds to transmit the activation signal. Normally T cell activation alone would not be enough to hinder regeneration, but the nerves from older mice had too much of another protein, major histocompatibility complex class 1 (MHC1), on their surfaces. The combination of the immune T cell activation and nerve MHC1 over-expression were required for impaired regeneration in the nerves from older mice, suggesting that it is in the face of dysregulation—possibly such as in spinal cord injury—that the findings of this study are relevant. Importantly, post-injury administration of an antibody blocking CXCL13 significantly restored growth and function of sensory nerves.

The potential impact of the study findings is made evident by its publication in the journal Science. The involvement of Miami Project researchers in this study, who played a lead role in generating and making sense of the large-scale RNA sequence data that lead the study team in the right direction, is due to a long-standing international relationship cultivated by senior leaders. As far back as 2014 the combined leadership of Drs. Lemmon and Bixby identified and fostered Dr. Danzi—at the time a student—honing his bioinformatics expertise onto the topic of neurotrauma and nerve regeneration. Remarkably, this is the sixth paper that Drs. Danzi, Bixby and Lemmon have published with the Di Giovanni lab.  The persistent commitment to these topics and trainees has now yielded this study, published in a prestigious journal, that boosts our understanding of immune-nerve interactions in regeneration while also identifying a potential therapeutic target in cases of neurological dysregulation.