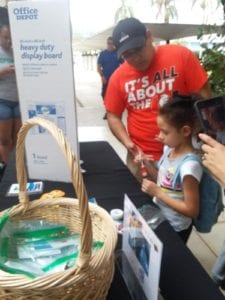 The Buoniconti Fund to Cure Paralysis, the fundraising arm of The Miami Project to Cure Paralysis, honored an unparalleled group of Hall of Famers, Gold Medalists, World Champions and philanthropists in front of a crowd of over 1,300 supporters tonight at the New York Hilton Midtown, raising millions toward spinal cord injury research during the 32nd Annual Great Sports Legends Dinner Presented by Tudor Group.

Among all the star athletes and celebrities who were honored or who attended, one particular Hall of Famer stood out for special tribute: the legendary Miami Dolphins linebacker Nick Buoniconti, who established The Miami Project and Buoniconti Fund following his son Marc being paralyzed in a college football game.

The event also served as a launch for the publication of Undefeated: From Tragedy to Triumph (Post Hill Press, Sept. 2017), a candid, compelling and inspiring memoir by Marc Buoniconti recounting his days as an admittedly reckless youth and teen to the day his world changed after his paralyzing football injury and how he has dedicated his life since to helping others, and to finding a cure for paralysis.  The Fund has raised some $350 million towards finding a cure for paralysis, and The Miami Project is the world leader in spinal cord injury research, treatment and programs. Located in the Lois Pope LIFE Center at the University of Miami Miller School of Medicine, The Miami Project is the only research center in the world conducting FDA clinical trials in spinal cord injury using the combination of Schwann cells and rehabilitation to attempt to re-stimulate damaged nerves.

“For 32 years the Great Sports Legend Dinner has supported a singular essential mission, finding a cure for paralysis,” said Marc Buoniconti. “The event has raised funds and awareness for ground-breaking, much-needed spinal cord injury research, as well as cutting-edge treatment and service programs.  We’re honored to have the generosity and participation of so many iconic athletes and heroes who join us in providing hope for those living with paralysis, so together we can stand as one.”

Since its inception in 1986, the Great Sports Legends Dinner has honored more than 300 sports legends and honorees and has raised millions for The Miami Project’s spinal cord injury research programs. The Buoniconti Fund to Cure Paralysis, through the research efforts of The Miami Project to Cure Paralysis, is committed to finding a cure for paralysis resulting from spinal cord injury and to seeing millions worldwide walk again.