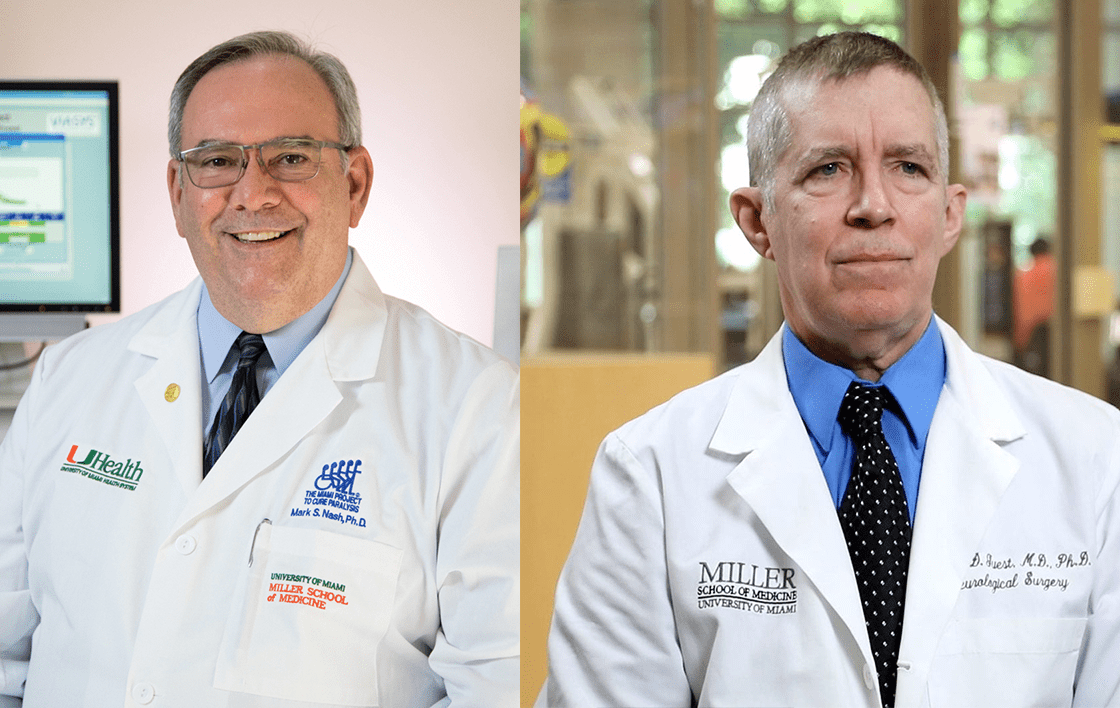 April, 2022 – The 2021/2022 Fellow of American Spinal Injury Association (ASIA) recipients have been announced, and two longtime University of Miami Miller School of Medicine researchers with The Miami Project to Cure Paralysis are among those named.  Mark S. Nash, Ph.D., FACSM, Associate Scientific Director for Research, The Miami Project, Vice-Chair for Research, Department of Physical Medicine & Rehabilitation, Professor, Departments of Neurological Surgery, Physical Medicine & Medicine and Physical Therapy, and Co-Director, DHHS-NIDILRR South Florida SCI Model System was one of the researchers bestowed with this honor.  The next named Fellow was James D. Guest, M.D., Ph.D., Clinical Professor, Department of Neurological Surgery and The Miami Project to Cure Paralysis. Both researchers have made significant contributions in the areas of rehabilitation and translational science in the case of Dr. Nash, and basic science and the clinical application of that research in the case of Dr. Guest.

Fellowship in the American Spinal Injury Association (FASIA) is bestowed by the ASIA Board of Directors in recognition of distinguished accomplishments within the fields of spinal cord injury research, clinical practice, education and advocacy, and for a longstanding active membership of service to the society. The designation of Fellow of American Spinal Injury Association recognizes prominent contributions to, and support of, ASIA’s policies, practices, operations, and goals, which together advance its organizational mission. The designation also carries with it an unofficial obligation of maintaining an example of accomplishment for others in ASIA and providing continued leadership in the field.

Dr. Nash is the Founding Principal Investigator of the Applied Physiology Research Laboratory for The Miami Project to Cure Paralysis and the current Miami Project Associate Scientific Director for Rehabilitation Research. Dr. Nash is a longstanding Fellow of the American College of Sports Medicine, and has published 175 peer-review manuscripts, scholarly monographs, and chapters on topics related to SCI. He’s been awarded or collaborated on grants from the U.S. Department of Defense, U.S. Department of Education, the U.S. Department of Health and Human Services, the National Institutes of Health, and the Craig H. Nielsen Foundation, which have primarily examined causes for, and interventions on all-cause cardiometabolic disease after SCI. He serves on the Editorial Board for the journal Topics in Spinal Cord Injury Rehabilitation, Chaired the inaugural Cardiometabolic Guideline Panel of the Paralyzed Veterans of America, and currently leads the International Spinal Cord Society and NIH/NINDS panel developing an extended dataset on voluntary exercise after SCI. He has presented more than 200 national/international lectures and invited talks addressing secondary complications of SCI, including 25 invited national and international keynotes. He is currently a member of the ASIA Executive Committee as Secretary-Treasurer and will proceed through the organization leadership track to become ASIA President in 2025.

“I am honored to be named an ASIA Fellow and to align the vision of ASIA with my career experiences at the Miller School of Medicine and The Miami Project to Cure Paralysis. The 37+ years of work with Drs. Dalton Dietrich and Barth Green, and many Miami Project scientists and co-workers, have provided an unparalleled scientific and personal experience for which I am immensely grateful,” said Dr. Nash.

Dr. James Guest has a career long interest in SCI with training in centers from medical school through the completion of his Ph.D. and neurosurgical residency that have strong relevant research environments. These included the University of Alberta, University of British Columbia (UBC) and ICORD, and the University of Miami and The Miami Project. Significant mentors have included Richard Stein at the U of Alberta, David Fairholm and Felix Durity at UBC, John Steeves at ICORD, Richard and Mary Bunge, as well as Barth Green, at The Miami Project, and Robert Grossman at Houston Methodist. During his Ph.D., Dr. Guest undertook electives at the University of Zurich with Martin Schwab and at the Karolinska University with Lars Olson.  Through this training and experience he developed a strong international collaborative focus. Trained as a spinal neurosurgeon Dr. Guest has studied relevant therapeutics including cell transplantation, neuroprotection, targeted molecular biologics and neuromodulation. Together with colleagues he has been involved in several SCI clinical trials and received funding from the NIH and DOD. He is currently serving as the Scientific Director of Spinal Research UK and co-director of the North America Clinical Trials Network.

“The American Spinal Injury Association is a key organization promoting optimal care after SCI and a nexus for therapeutics translation. I am honored to be selected for Fellowship,” said Dr. Guest.

FASIA award recipients are honored each year during the ASIA Annual Scientific Meeting, this year in May.