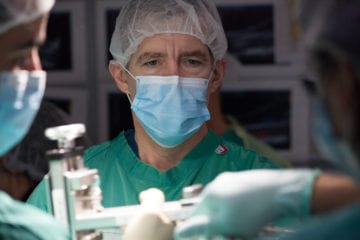 (November 2020) A Miami Project to Cure Paralysis research team, led by James Guest, M.D., Ph.D., Clinical Professor, Department of Neurological Surgery and The Miami Project, recently published a paper in Frontiers in Neurology, titled Progressive motor circuit recovery after cell transplantation in sub-acute complete paraplegia, that demonstrates positive motor circuit recovery following cell transplantation. The subjects in this study were all sub-acutely spinal cord injured, which means they are within a few weeks of their injury, and determined by post injury testing to be ASIA complete paraplegic.

The research team had the idea that they might be able to find connections through the spinal injury area, even though it might be hard to detect such connections with clinical tests. They wanted to be able to tell if new connections form and identify what are the most sensitive available techniques to find them. They built off earlier motor circuit recovery work from The Miami Project, and others, that has shown that muscles of the foot and lower leg are the first to show recovery using neurophysiologic techniques in people with paraplegia.

Interestingly, the research team found several changes that were not detectable by the standardized clinical exam. Importantly, these included progressive recovery of voluntary activation of leg and foot muscles detected with EMG and of conduction with MEPs. When a person has paraplegia, it is customary to refer to the neurological level- that is the last level from top to bottom with intact function. However, that assessment is made by sensory skin test such as light touch and pin prick detection. There is no motor test to assign this level. By measuring from chest muscles known as intercostals, the team found that there were connections below the “sensory” level in each subject. Galvanic skin testing for sweating revealed unexpected changes in the hands well above the injury levels. Of all the tests, the voluntary EMG, a diagnostic procedure to assess the health of muscles and the nerve cells that control them, appeared most sensitive. These consistent findings challenge the current conceptualization of complete paraplegia with a single neurological level. Neurophysiology studies are sensitive tools to measure neural connectivity as biomarkers that are important to use in therapeutics trials to detect therapeutic activity.

“We found, beginning at 2 months, and out to a year every subject eventually had some detectable connections. Although both EMG and motor evoked potentials were found, EMG was most sensitive and proves the function can be voluntarily activated. This was most important to us because it adds to accumulating evidence that most spinal cord injuries are not really complete in the sense that the spinal cord is completely severed with no signaling below the level of injury,” said Dr. Guest.

This particular motor circuit recovery study was novel because to achieve their goal of understanding the extent of injury, the team created a testing array for the intercostal and abdominal muscles that is original and is a prominent part of the study. The team conducted electrophysiological testing after each transplant with the main time points being two months, six months, and 12 months after the transplant. Early on the researchers realized that it would be very important to know how function was changing in the chest and abdomen because all the subjects were paraplegics with a diagnosed complete level between T2-T6.

So innovative was the approach that the reviewers did not initially believe the data.  The team was required to provide extensive additional data to persuade of the validity of the data over a period of 10 months.  To provide an extra level of transparency, the exchange with the reviewers is also documented in the journal.

The research team went to the hospital and conducted the first tests in the rehabilitation ward because they wanted to be sure before being enrolled that all participants had a complete injury according to all available measures. For that reason, they set the criteria that the motor and sensory evoked potentials should be negative at the time of the baseline testing. This study gives the field additional critical information that may shape the direction of future interventions. Dr. Guest notes that the observed recovery is not proof of effectiveness of the Schwann cell transplants because the trial did not include a control group. However, it adds to evidence of safety of the transplantation paradigm in people with subacute paraplegia.