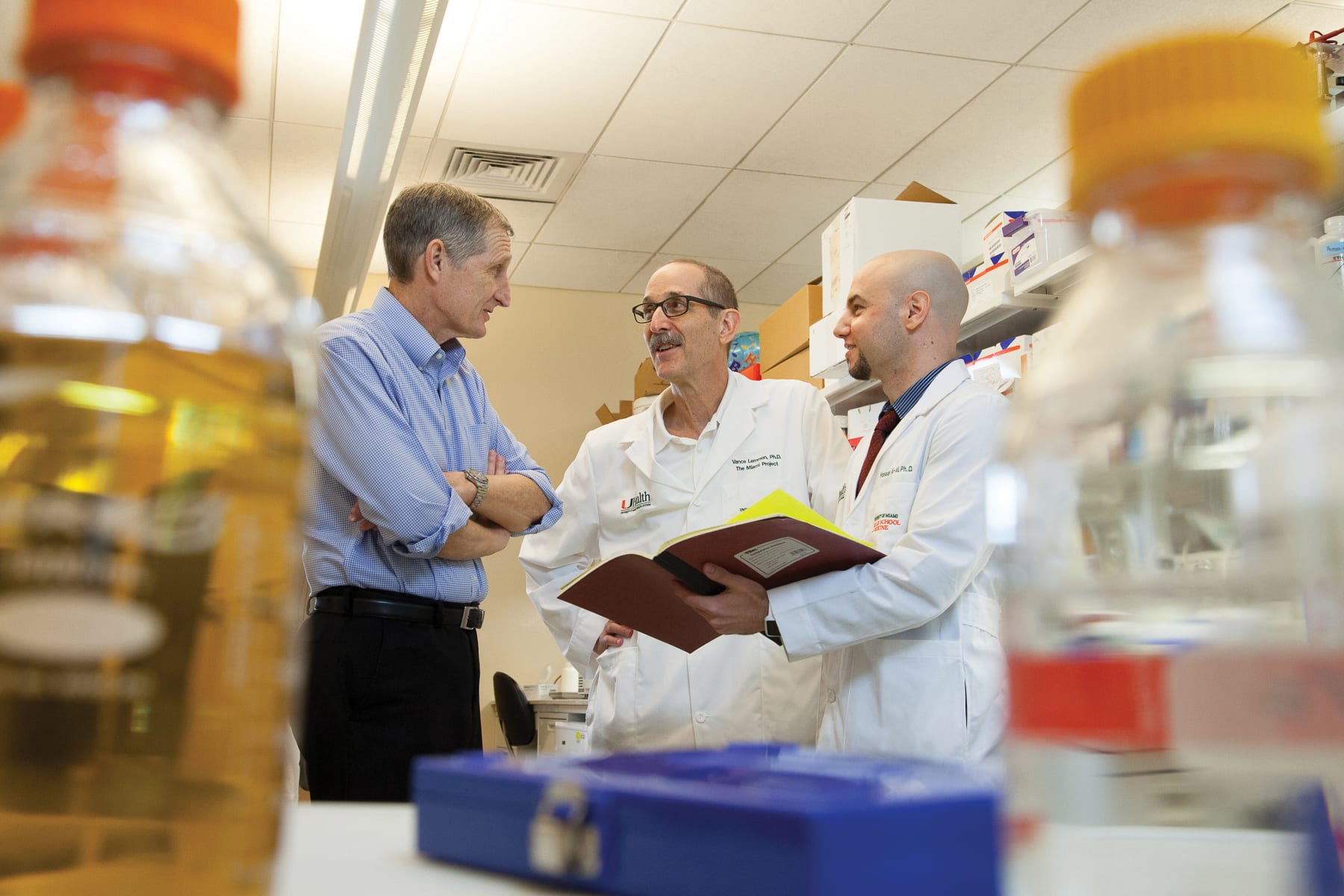 (December 2020) Miami Project / University of Miami Miller School of Medicine researchers, as part of a collaboration with a UM-based biotechnology spin off, Truvitech LLC, and scientists from University of California, San Diego, University of California, Davis, University of Miami, Wilmer Eye Institute at Johns Hopkins, Stanford University, and University of California, San Francisco, deployed its novel idTRAX technology to identify the first group of kinase targets that provide long-term neuroprotection of retinal ganglion neurons, while simultaneously promoting axon regeneration in those neurons. The targets were then validated in a series of elegant in vitro and in vivo studies. This discovery, just published in Proceedings of the National Academy of Sciences (PNAS) and titled Inhibition of GCK-IV kinases dissociates cell death and axon regeneration in CNS neurons, will have significant implications for the treatment of chronic neurodegenerative diseases such as glaucoma, and potential application in other neurological injuries and disorders like spinal cord injuries, brain injuries, Alzheimer’s and MS.

Previous attempts to identify drug targets for neurodegeneration with existing technologies resulted in the identification of the dual leucine zipper kinase (DLK) as a potential target. The DLK signaling pathway was shown to be a key regulator of axonal injury-induced neuronal cell death; however, DLK also has an important role in promoting axonal outgrowth. Therefore, inhibiting DLK as a therapeutic approach for neurodegenerative diseases is limited to a neuroprotective outcome without axon regeneration, prohibiting restoration of function. In the new study, the research team identified the germinal cell kinase four (GCK-IV) family of kinases as targets to maximize neuroprotection, while also promoting axon regeneration, making it an attractive therapeutic approach for a subset of neurodegenerative diseases and central nervous system (CNS) injuries and conditions. These new targets, which were identified by idTRAX, were missed by existing technologies that use gene manipulation (e.g. siRNA and CRISPR), thereby highlighting the power of idTRAX for drug target identification.

“We had originally developed idTRAX at the University of Miami to discover drug targets for spinal cord injury, but quickly realized that the technology is readily transferable to other applications and extremely powerful. It routinely identifies highly effective drug targets that are typically missed by existing approaches such as siRNA and CRISPR. The discovery of the GCK-IV kinases as targets in neurodegeneration is yet another demonstration of the platform’s power and versatility. We hope that this landmark study will pave the way for the development of therapeutics that can effectively treat neurodegenerative diseases”, said Hassan Al-Ali, Research Assistant Professor, Department of Neurological Surgery and The Miami Project.