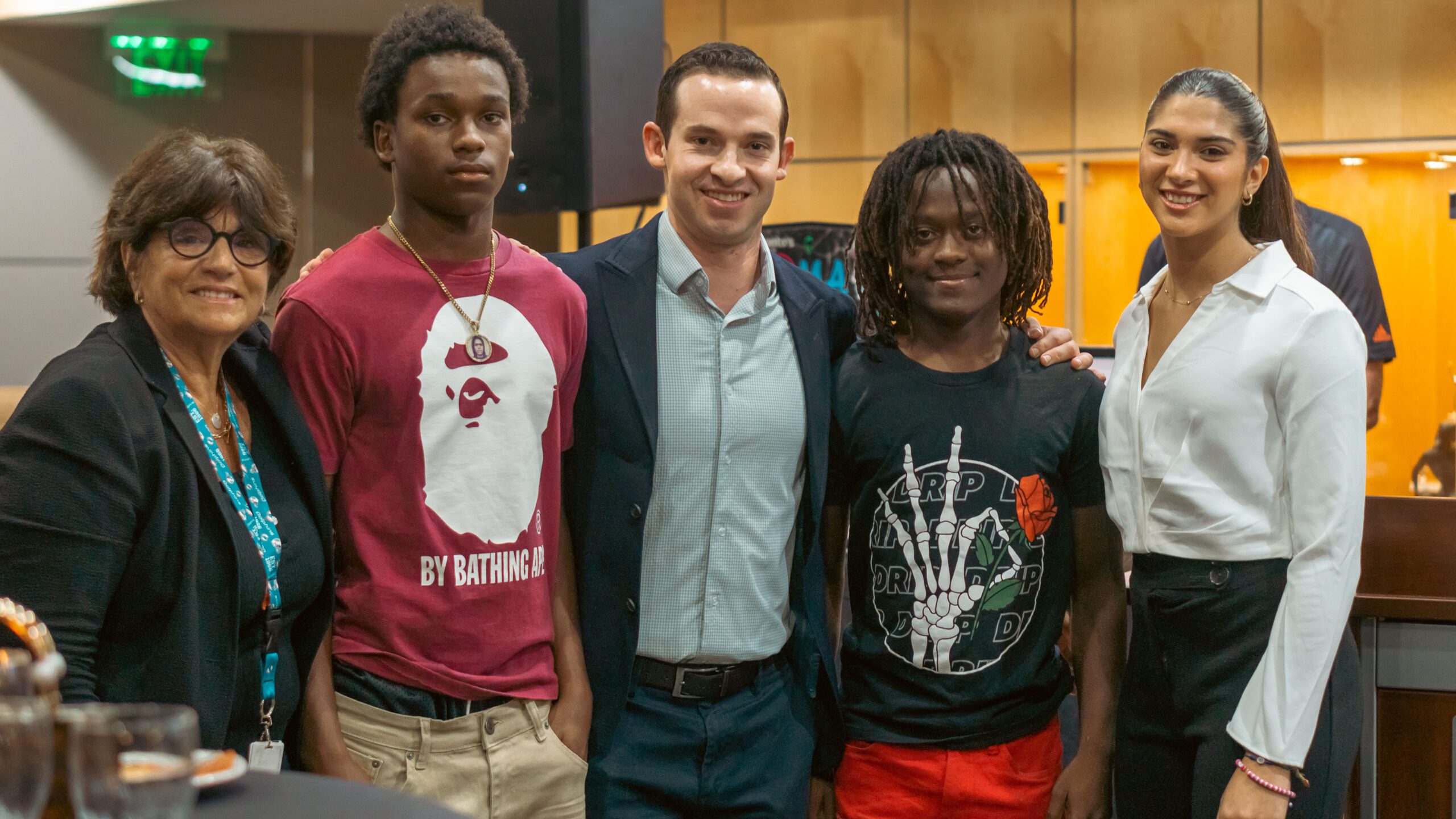 (December, 2022) On November 28th the Kidz Neuroscience Center at The Miami Project to Cure Paralysis / University of Miami Miller School of Medicine celebrated the 10th Anniversary of the Countywide Concussion Care Program and passing of the Youth Concussion Legislation in 2012, known at the time as Florida House Bill 291.

A throng of supporters, children who have been helped by the program, doctors and researchers who have advanced the science, and pioneering families, legislators and administrators gathered for the upbeat celebration in the Hurricane 100 Room at the Watsco Center on the University of Miami campus in Coral Gables.

“I am humbled by all the support since the start of the program. I have spent my career trying to make this world a safer place for children to play, learn and grow. Our programs have buy in from so many people that our impact continues to grow every year to make our community safer, and that is very gratifying,” said Gillian A. Hotz, Ph.D., Research Professor, Department of Neurological Surgery, Director, KiDZ Neuroscience Center, Director, UConcussion, WalkSafe®, BikeSafe®, and SkateSafe® Programs.

The UConcussion Program, that Dr. Hotz directs with current Medical Director Dr. Abraham Chilieuitt, includes a comprehensive program and implementation of a countywide high school concussion program which includes baseline testing through ImPACT, sideline screening, concussion clinic follow up with gradual return to play and learn, and a concussion injury surveillance system. As part of the program Dr. Hotz and her team train high school and college athletic trainers, directors and coaches on a yearly basis. These efforts are annually supported by the Miami Dolphins Foundation. This year was dedicated to the recently passed long time Director and SVP of Communications and Community Affairs Jason Jenkins.

Rashauna Williams, representing the Miami Dolphins Foundation at the event said of Jason and the Foundation’s support, “This program will always be near and dear to our heart. The day that Jason passed was the day that we honored the concussion program at the Dolphins game.”

David Goldstein, local advocate who in 2011 as a student athlete at Ransom Everglades
sustained concussions and lead the way with his family in passing the Youth Concussion Legislation in Florida, “When I suffered my third concussion in four years, I had absolutely no idea where to turn. I went into the UConcussion clinic somewhat skeptical based on my prior experience and Dr. Nedd and Dr. Hotz who treated me listened to me describe my symptoms and took my issue seriously. They helped me recover and they gave me my life back.”

Former Florida State Senator Anitere Flores, who co-sponsored the legislation, said, “I had the opportunity to meet Cheryl, Adam and David (Goldstein) and they had an incredible impact not just in my life, but in my professional career as well. Thank you for letting me be an instrument to the amazing idea that David had.” Of the program the Senator continued, “Rest assured that you have saved people’s lives. Rest assured that you have made an impact in the lives of so many people every single day.”

The Countywide Concussion Care Program helps about 250 high school kids annually and works with the athletic trainers to ensure protocols are followed. The program has been implemented within all 35 public high schools and many of the private high schools in Miami Dade County.

Latoya Williams, Director of Athletics for the Miami-Dade County School Board said, “I want to thank everyone for this wonderful partnership. In everything you do in life there is someone who paves the way, the trailblazer that burns the way so that your job is that much easier,” she said of her mentor and predecessor who started the program in Miami-Dade County Schools Cheryl Golden.

During the festive evening, the family of Dr. Hotz surprised her by providing the seed funding to establish the Dr. Gillian A. Hotz, KiDZ Neuroscience Education Fund. The Fund will support the training, education, outreach priorities for pre-med students and fellows doing research at the KiDZ Neuroscience Center.

Don Baily, Jr., Miami Hurricanes Football Analyst served as event emcee and helped acknowledge supporters and special guests who were instrumental to the success of the program including Drs. Kester Nedd and Lee Kaplan, Adam and Chanin Carlin, Goldstein family, ImPACT Applications, Codina Partners, Ackerman Law Firm, the Green, Ertel, Arriola, Judy Winberg, and Andy Pollack and Family, Arviv Family, Quint families and Diana Brett and the family of Daniel who passed away after suffering years with post-concussion syndrome. Also thanking those part of the UConcussion Team, the Event Committee and those that provided the auction items.

Special guests, mascots Sebastian from the University of Miami and the Miami Heat’s Bernie helped close out the evening by entertaining attendees with dancing and good-natured interactions along with the DJ Morgan Anisman from Magenboys and the band.

The KiDZ Neuroscience Center is dedicated to reducing the number of children and adolescents that sustain brain and spinal cord injuries. As part of The Miami Project to Cure Paralysis at the University of Miami Miller School of Medicine, the center has brought injury prevention to the youth in South Florida since 2001 through our evidence-based WalkSafe, BikeSafe, SkateSafe, and Concussion Programs.

Through partnerships with Miami-Dade Public Schools, City of Miami Parks, the Miami Dolphins Foundation, and many other community organizations, we’ve been able to help children throughout Florida enjoy outdoor activities safely and healthy as possible.

Prevention and collaboration are at the core of the KiDZ Neuroscience Center, a youth-focused branch of The Miami Project to Cure Paralysis headed by Gillian A. Hotz, Ph.D. and dedicated to reducing the number of children and adolescents that sustain brain and spinal cord injuries. KiDZ is now a Miami Project staple, launched in 2001 and since establishing and sustaining partnerships with Miami-Dade Public Schools, City of Miami Parks, the Miami Dolphins Foundation, and seemingly countless other community organizations in the South-East Florida region and beyond. In accordance with our ethos and historical precedent, KiDZ has continued to adapt to recent trends and expand in response to circumstance, as well as vision.

Prevention means intervening when and where it matters most, and the KiDZ Neuroscience Center’s injury prevention programs have for years been delivering interventions at the earliest possible point in our diverse communities. Including all children—as well as their families and communities—these programs have a rich history of bringing street, crosswalk, bicycle, and helmet education to the youth in their natural environment.