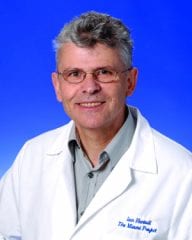 Around one hundred thousand people with Parkinson’s disease presently have their symptoms safely relieved with continuous electrical deep brain stimulation (DBS), using surgically implanted brain electrodes. DBS has also been studied for stopping severe pain, overeating and depression, among other similar brain disorders. A big unanswered question is whether long-term DBS can be used not simply to block ongoing symptoms but to permanently reverse damage in brain or spinal cord injury, or in related problems of nerve degeneration such as multiple sclerosis (MS). In the Hentall and Brambilla labs, they previously showed that DBS targeting certain restricted brain regions can enhance recovery from spinal cord injury and traumatic brain injury in rats. The new publication asks the same question of MS, whether the brain inflammation and nerve degeneration of MS can be blocked by DBS in one of these regions.

The scientific team studied mice that were given a disease called EAE, which is similar to MS and is commonly used for its experimental study. Some of the mice were stimulated for 2-3 weeks, using brain stimulators that we developed especially for this study. The treatment caused lasting reversal of the visible symptoms of nerve damage. They also looked at the state of diseased spinal cord tissue, and found that stimulation increased the amount of the myelin around nerves; loss of myelin is a major issue in MS. Furthermore, inflammation was reduced with respect to both the production of inflammatory molecules and the harmful entry of immune cells into the spinal cord.

These results suggest, fundamentally, that electrical activity in certain brain cells can have large enduring benefits in inflammatory brain diseases like MS. For new approaches to MS treatment, it may be productive to consider increasing the activity of these cells–not necessarily with direct DBS of the region studied, which has surgical risks, but perhaps with DBS in one of its input regions. Administering drugs that mimic the substances released by these cells (a combination of serotonin and certain small protein molecules) is another major alternative that the present findings suggest may be worth pursuing in future studies.