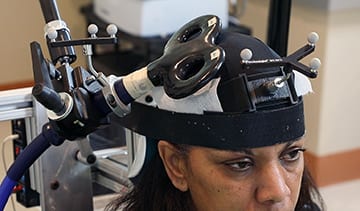 Monica A. Perez, P.T., Ph.D., Associate Professor, Department of Neurological Surgery and The Miami Project, and colleagues, recently published A novel cortical target to enhance hand motor output in humans with spinal cord injury in the June issue of Brain that provides the first evidence that cortical targets could represent a novel therapeutic site for improving motor function in humans paralyzed by spinal cord injury (SCI).

A main goal of rehabilitation strategies in humans with SCI is to strengthen transmission in spared neural networks. Although neuromodulatory strategies have targeted different sites within the central nervous system to restore motor function following SCI, the role of cortical targets remains poorly understood.

“I am excited to see that electrophysiology can be successfully used to guide interventions for recovery of function after spinal cord injury,” says Dr. Perez.

In this study, Dr. Perez, Jinyi Long, Ph.D., and Paolo Federico, Ph.D. used 180 pairs of noninvasive ranscranial magnetic stimulation for 30 minutes over the hand representation of the primary motor cortex at an interstimulus interval mimicking the rhythmicity of descending late indirect (I) waves in corticospinal neurons (4.3 ms; late I-wave protocol) or at an interstimulus interval in-between I-waves (3.5 ms; control protocol) on separate days in a randomized order.

Late I-waves are thought to arise from trans-synaptic cortical inputs and have a crucial role in the recruitment of spinal motor neurons following SCI. The researchers found that the excitability of corticospinal projections to intrinsic finger muscles increased in SCI and uninjured participants after the late I-wave but not the control protocol for 30 to 60 minutes after the stimulation. Importantly, individuals with SCI were able to exert more force and electromyographic activity with finger muscles after the stimulation showing an enhanced ability to grasp small objects with their hands.

“This study is a major contribution to the realization of a powerful new class of rehabilitation therapies that can target beneficial plasticity to crucial sites in the nervous system. By taking advantage of recent scientific and technical advances, Dr. Perez’s group produced beneficial change in the cortical circuitry and spinal connections underlying voluntary movement,” says Dr. Jonathan R. Wolpaw, M.D. Director of the National Center for Adaptive Neurotechnologies Albany, New York.

These results emphasize the need to develop new rehabilitation therapies based on mechanistic approaches to improve motor function in humans with paralysis due to spinal cord injury. Currently, Dr. Perez’ group is testing the effect of this intervention when given on consecutive days and in individuals with more severe muscle paralysis.

“What I find appealing about the work is that they exploit a basic characteristic of the human corticospinal neural circuit and designed a way to strengthen connections that does not depend on the person performing a motor task,” said John H. Martin, Ph.D.,The City College of New York.