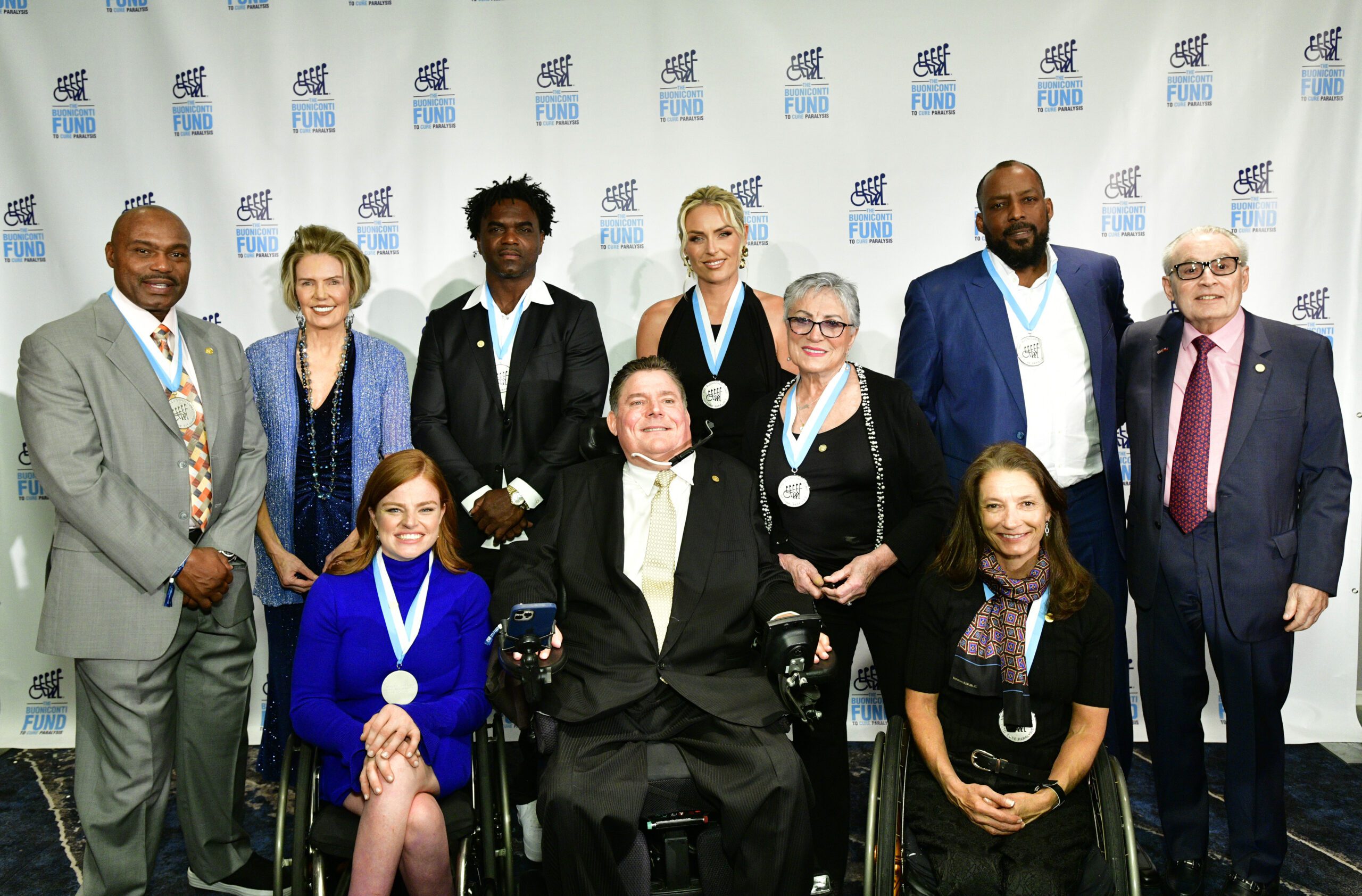 October 25, 2022 – Demonstrating unparalleled courage and resilience in the face of enormous challenges and adversities, Mary Kate Callahan and Sarah Will have risen to the top of the Para-Athletic world and, in so doing, have become sterling inspirations for countless thousands of others with spinal cord injuries. So it was only natural that they were among the sports icons honored by The Buoniconti Fund to Cure Paralysis’ 37th Annual Great Sports Legends Dinner, presented by Tudor Group and the Mack family, in New York City on Monday, October 24th.

The Buoniconti Fund is the fundraising arm of The Miami Project to Cure Paralysis, the world’s premier spinal cord injury research center.

As in previous years, Marc Buoniconti delivered an inspiring speech honoring his father, who co-founded The Miami Project to Cure Paralysis in 1985 after Marc was paralyzed in a college football game. Before his death in 2019, Nick spent more than three decades dedicated to finding a cure for people affected by spinal cord injury, including his son and millions of others around the world.

“Each year, I find myself more and more inspired by the amazing athletes and individuals who are honored at this Great Sports Legends Dinner,” said Marc Buoniconti, Buoniconti Fund President. “The evening was filled with emotions and I know my dad’s spirit was in the room with us as we paid tribute to these great individuals, all of whom were able to come together on this one night to help cure paralysis.”

Since its inception in 1985, the Great Sports Legends Dinner has honored nearly 400 sports legends and humanitarians and has raised more than $130 million for The Miami Project’s spinal cord injury research programs. This year’s dinner was presented by Tudor Group and the Mack family, and chaired by Mark Dalton. Additional benefactors include: Reed Mack, Carnival Corporation & plc, Carnival Foundation, Micky and Madeleine Arison, Pepe Badia and Badia Spices, Inc.

Tim Hardaway is a newly inducted Hall of Famer, a five-time All-NBA Team member and an Olympic Gold Medalist.

Vladimir Guerrero, nicknamed “Vlad the Impaler,” is a member of the Baseball Hall of Fame, a nine-time All-Star, and a former Most Valuable Player.

Shirley “Cha Cha” Muldowney is the “First Lady of Drag Racing,” having been the first female to receive a license from the U.S. Hot Rod Association to drive a Top Fuel dragster, and the first person, male or female, to win three Top Fuel titles.

Sarah Will is the most decorated athlete in U.S. Paralympic Alpine Skiing history, with 13 Winter Paralympics medals, and a member of the U.S. Olympic Hall of Fame.

The 1972 Miami Dolphins are simply the only football team in history to have a perfect season, going undefeated in the regular season, then sweeping the playoffs before going on to win the Super Bowl.

Nick Buoniconti was a NFL Pro Hall of Famer who was the middle linebacker and captain of that legendary undefeated team, a two-time Super Bowl champion, and the founder of The Buoniconti Fund and its parent organization, The Miami Project to Cure Paralysis.

Philanthropist Lois Pope, the nation’s foremost supporter of disabled veterans who made a $10 million gift more than 20 years ago to endow the Lois Pope LIFE Center as the home for The Miami Project, received The Buoniconti Fund Humanitarian Award.