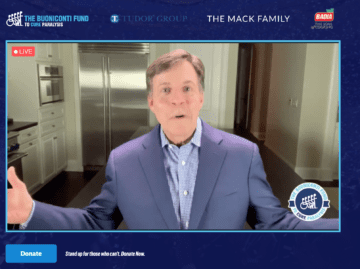 (October 2020) – While the 35th Annual Great Sports Legends Dinner benefiting The Buoniconti Fund to Cure Paralysis had to be held virtually rather than at its traditional standing-room-only New York City hotel ballroom setting, the stories told at the event by those living with spinal cord injury and paralysis; the sports icons and musical stars who stressed the importance of supporting The Buoniconti Fund, the fundraising arm of The Miami Project to Cure Paralysis; and  the researchers who brought to light the advancements pioneered through the resources of the Fund and Project were no less impactful and inspirational.  The dinner raised more than $2 million to support the groundbreaking work of The Miami Project, the leading center in the world for spinal cord injury research.

In fact, the overarching theme of the dinner, Stand Up For Those Who Can’t, was beautifully illuminated in remarks by all those who participated in the livestream event, emceed by legendary sportscaster Bob Costas.  They included previous Great Sports Legends honorees: Three-time Major League Baseball Most Valuable Player and World Series Champion Alex Rodriguez; the “Golden Bear” Jack Nicklaus, 18-time Golf Major Champion and the greatest golfer of all time; Olympic Gold Medal figure skater champion Tara Lipinski, Red Sox World Series Champion and MVP David Ortiz,  National Football League Hall of Fame safety and nine-time Pro Bowler Ed Reed, and World Series champion Mariano Rivera, the only MLB player to ever be unanimously elected to the Hall of Fame.

Through their special musical performances, created just for the Great Sports Legends Dinner, the Rock and Roll Hall of Famer Jon Bon Jovi, multiple Grammy Award winner Gloria Estefan, and the cast of the Broadway smash Hamilton also highlighted their commitment to the cause.

But perhaps the true highlight of the Great Sports Legends Dinner evening were the inspirational and emotional stories told by several patients at The Miami Project to Cure Paralysis, located at the University of Miami Miller School of Medicine.  Indeed, through their words and actions, they showcased their triumphs — one just completed part of the Miami Marathon with the help of a walker; another regained the strength and ability to continue his life as a prominent photographer, world traveler and outdoor adventurer.  Their stories brought to life the incredible breakthroughs that the doctors and scientists have been making over the last 35 years at the Miami Project to Cure Paralysis.

Maria Jose Torrealba, who completed part of the Miami Marathon with the help of a walker, said “The Miami Project taught me that hard work will pay off when combined with their expert care. There is nothing I can’t do. I won’t stop competing in marathons, I won’t stop dreaming.”

Marko Dimitrijevic,  shared his Miami Project story, “Before my accident I was very active: scuba diving, visiting the arctic to shoot underwater photography, I had been to over 100 countries in the world – but two months ago my life changed forever from my accident. The Miami Project and Dr. Green have given us the tools for me to regain my strength faster than any other program.”

Marc Buoniconti, the Fund’s President who was paralyzed in a college football game 35 years ago, paid a beautiful tribute to his late father Nick, the NFL Hall of Famer who founded the fund to benefit his son and others who were paralyzed. Marc, while remembering his father’s passing a year ago, said, “It seems like a lifetime ago, and in many ways it was just like yesterday. As we all deal with the new realities of life and the pandemic, we know it essential that we keep moving forward. I have full confidence that my father would be proud that his original mission continues at The Miami Project, and I will not rest until his dream of curing paralysis is a reality.”

During the virtual Great Sports Legends Dinner event, athlete honorees shared heartfelt words of gratitude for their inclusion in the evening, as well as urged guests to continue donating to the Buoniconti Fund.  Ed Reed said, “I never would have thought, growing up with two paralyzed uncles, that I would be amongst so many people with this injury and to be helping this community. What happened to Marc has changed so many lives and I am so grateful to be a part of this community.  To cure paralysis you need great people, people who are fighting constantly. I know The Buoniconti Fund is doing just that.”

Alex Rodgriguez, who has been a longtime friend of The Buoniconti family and supporter of The Miami Project, said “Nick always told me about how important this project was to him, he never talked about being a hall of famer, or a great linebacker, this project was front and center to his life – it was his vision and his purpose. I love supporting this event and this cause, we are doing it to get one step closer to our goal: to get one step closer to curing paralysis.”

A Nick Buoniconti super-fan turned friend, Jack Nicklaus spoke to guests about his relationship with the family and how he would attend almost all of Nick’s games when he was in Miami. He said, “I’ve gotten to see, through my friendship with Nick, what an incredible person Marc is – how he has worked so hard, so tirelessly despite his paralysis. Nick wished that one day he could walk the fairway with Marc, and if Nick was still with us, he may have gotten to see that dream come true.” Nicklaus capped his heartfelt message, “Marc, you and I will walk that fairway one of these days.”

Entertainment guests Bon Jovi, Gloria Estefan and The Cast of Broadway’s Hamilton each gave vibrant performances. Bon Jovi’s “Living on A Prayer” and other songs were performed from a recording studio, while Gloria Estefan’s “Rhythm is Gonna Get You” resembled a concert with backup singers and stage design harkening back to her days pioneering the “Miami Sound Machine.” The Cast of Broadway’s Hamilton performed an emotional mash-up of Michael Jackson’s “Man in the Mirror” and the Hamilton hit, “It’s Quiet Uptown.”

The evening, presented by Tudor Group, the Mack Family and Badia Spices, was hosted by Buoniconti Fund President Marc Buoniconti and The Miami Project co-founder and chairman Dr. Barth Green. Dinner Chairman Mark Dalton closed the evening, “The inspiration that the Sports Legends have given us over the years has been extraordinary, and has inspired over $125 million donated to the effort to cure paralysis. It is a dream that Nick has passed on, and it is a dream we can continue and pass on until a cure is found.”

Since its inception in 1986, the Great Sports Legends Dinner has honored more than 370 sports legends and humanitarians and has raised more than $125 million for The Miami Project’s spinal cord injury research programs. The Miami Project and Buoniconti Fund to Cure Paralysis is committed to finding a cure for paralysis resulting from spinal cord injury and to seeing millions worldwide walk again.