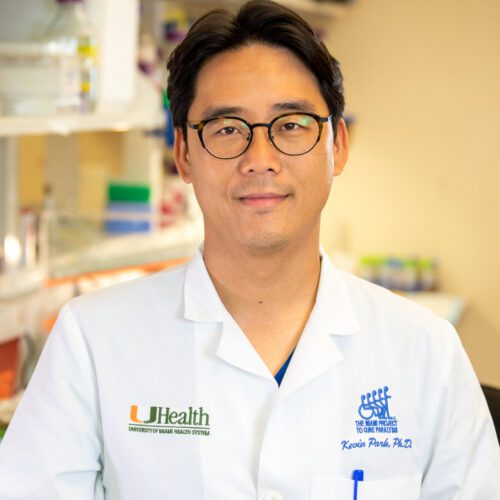 Kevin (Kyung) Park, Ph.D. is a Professor at The Miami Project to Cure Paralysis in the Department of Neurological Surgery, Director of the Viral Vector Core at the University of Miami Miller School of Medicine. He received his undergraduate degree in 2001 from the University of Western Australia, with an honors thesis conducted in the laboratory of Dr. Bruno Meloni, investigating the effects of hypoxia in cultured neurons. In 2007, he received his doctorate degree in Anatomy and Neuroscience under the training of Dr. Alan Harvey and Dr. Qi Cui at the University of Western Australia, studying the molecular mechanisms of neuronal regeneration.

Dr. Park was a postdoctoral fellow at Children’s Hospital Boston at Harvard University with Dr. Zhigang He, determining the role of growth-controlling genes in regulating nerve repair. In 2010, Dr. Park joined the faculty at University of Miami Miller School of Medicine. Dr. Park is a recipient of numerous awards and honors including Pew Scholars in Biomedical Sciences (class of 2012) and E. Matilda Ziegler Award.

Mechanisms of Axon Regeneration and Neuroprotection

My lab is interested in understanding the mechanisms that account for failure of axon regeneration and the demise of neurons after injury in the central nervous system (CNS). Using in vivo models of nerve regeneration and injury, my lab focuses on number of important questions relevant to neural repair.

The Link Between Optic and Spinal Nerves (May 2022)

Association for Research in Vision and Ophthalmology